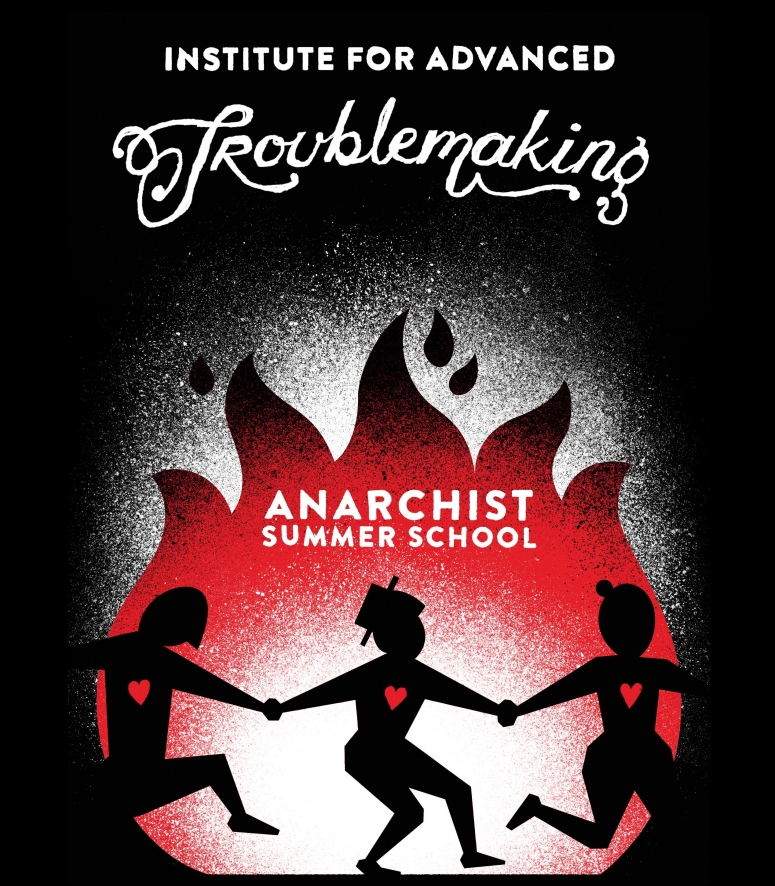 The Institute for Advanced Troublemaking (IAT) is composed of a small collective of longtime anarchist organizers seeking to create a lasting movement education hub in the Northeast of the so-called United States to train new and old organizers alike. In this way, we hope to raise our collective capacity to both challenge all forms of hierarchy and domination while prefiguring egalitarian alternatives premised on anarchist ethics, such as mutual aid, freedom, solidarity, self-organization, and care.

Our Anarchist Summer School, now in its fourth year, brings together new and experienced anarchists and like-minded others for eight days of co-learning and serious play. Through participatory workshops, hands-on practice and skill shares, pitching in to tasks around our shared “summer camp” space, and circling around the campfire, we intentionally co-create a community even as we cultivate a deeper understanding of theory and praxis. That understanding, which is more like a rich and growing conversation over the course of the Anarchist Summer School, critically and constructively touches on what we face today as well as what we envision instead, grassroots/community organizing, building do-it-ourselves infrastructures, engaging in various forms of direct action both to shut down what we don’t like and open up space for what we want, and so much more.

In part we are inspired by long-lasting radical education projects such as the IWW-associated Work People’s College (1907–41), Movement for New Society’s “Life Centers” (1971–88), the Highlander Folk School (1932–present), the National Conference on Organized Resistance (1994–2004), and the Institute for Social Ecology’s monthlong “anarchist summer school” (1974–2004), among others. These examples are notable largely for drawing organizers together in order to innovate theories, strategies, and tactics for their context—tools that were intentionally injected broadly into radical movement work. These longer-form education projects are also remarkable in that their alums often remained lifelong radicals.

While informal education spaces, campaign-based action camps, and bookfairs are important elements of our struggle, they have serious limitations as well, precisely because they are short lived. By creating longer-form popular education, the IAT and its Anarchist Summer School hopes to give space and time to go in-depth on contemporary anarchist analysis, theory, and concrete skills and practices. The IAT is a move toward creating a more rigorous exploration of anarchism that is: